Kicking It Along the NW Coast 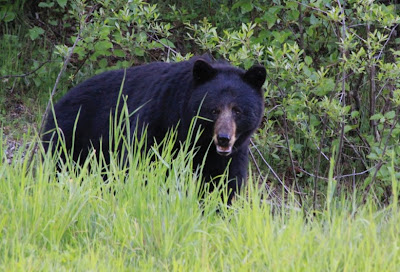 Black Bear in Whistler, BC
I am still around in this on-line world, mostly reading blogs written by friends. Facebook has become my daily vehicle of choice in staying in touch with friends and those I have met via blog writing. I am updating this blog to keep it online in case a purging occurs for inactive blogs. During the past couple of years we have continued our life here in the PNW, have spent time traveling in British Columbia and Alberta, Canada; Oregon; Montana; Idaho; Washington; and the eastern US. We've seen 30 or more black bears, several as recently as July, 2012 in the Whistler, BC area. We continue to commune with the Orcas in the waters off the coast of Canada. When we saw one doing cartwheels across the Salish Sea we were as thrilled as children. We've sailed under red sunsets that looked like the sky had been set on fire, watched fireworks drop into the Pacific Ocean, and saw others illuminate the sky from a small, chartered boat in a tiny Canadian cove surrounded by mountains off the Strait of Georgia. We've attended musical concerts, heard the Oregon symphony play, enjoyed good food and entertainment at a local Jazz Dinner Club, and laughed heartily at well written and perfectly delivered comedy routines. Impromptu day trips are still a favorite way to entertain ourselves as we explore our magnificent PNW world. The local seafood nourishes us, and we eagerly anticipate May each year when the Copper River Salmon from Alaska arrive here en route to the lower 48. There is nothing quite like our local summer farmers' markets and Seattle's Pike Place international market to remind us of the natural gifts of the earth and seas.

The gardens looked a bit different this year after 3 conifers were removed, opening an area to more sunlight with a new island of real estate for planting. The trees were replaced with spring blooming magnolias, one in buttery yellow and the other in magenta purple hues. These joined a Teddy Bear magnolia which looks much like the large Southern Magnolia but in dwarf form with fragrant white saucer blooms. New azaleas in yellow, apricot, and wine added even more color to the new area, all planted near a deep purple peony, large purple rhododendrons, and a pink Japanese dogwood. Spring will be a feast of colors and fragrances, and we can hardly wait!

Summer brought containers filled with annuals in every color to mix into the landscape. Pink and cranberry spirea bloomed at the end of the season, and yellow potentillas finally picked up a growth spurt, lighting the lower gardens in sunny yellow. A large urn of red geraniums, purple lobelia, and yellow million bells sits a level higher so blooms can spill out above the potentillas. The flagstone pathway begins its curve here and meaders through a woodland area populated in ferns under conifer boughs. Hostas, multi-colored impatiens, blue and white hydrangeas, red hellebores, deep scarlet Martha Washington geraniums, and magenta bergenias surround a large birdbath and Asian pagoda. An Oregon grape is showy with chartreuse yellow blooms near one of my favorite shade loving plants, a native huckleberry with tiny, delicate leaves. A camellia may finally bloom this winter with the additional light now available to that area. We'll see. It and a Japanese pieris have shown very little growth since being planted 5 years ago. The huge leafed fatsia rising behind a garden bench has been pruned to contain its growth several times. Apparently it is much happier than its friends. We like the silver speckled lamium that falls from a container and the gold-dust acuba japonica which add light and color to the shade and mix well with the and burgundy rhododendrons nearby. When the sunlight is right it is a glorious mix of colors, but any loss of needed light will rob the area of blooms.

This year's project, postponed from 2012, will be a water feature. Water will fall from a huge natural boulder that has been on the property since the house was built. This area is filled with basalt rocks and boulders. The water will appear to fall from the boulder into a pond surrounded by river rocks and smaller boulders which we will add. Then we'll fill in with plants and strategically placed pots of colorful blooms that spill over rocks.

La Niña ensured we had a very slow drying spring and delayed summer in both 2011 and 2012. We have no idea what to expect this year. Summer in 2012 did not arrive until early July and even then only provided minimal warmth. I don't recall ever leaving home without a jacket for the late afternoon and evenings. Some called it a "green tomato summer," never enough heat to ripen the tomatoes. We did not even plant veggies the past couple of years. Not enough heat around or a long enough growing season to ripen the fruit/veggies.

During the past couple of years a few people we love have died; their absences felt deeply, their friendships missed. One friend left us totally unexpectedly and far too soon, and I am still reeling with the shock of it. A sudden and overwhelming loss can shake you to your core. So many dreams were left behind. She and I enjoyed 20+ years of lunches while working on projects through our jobs. We discovered interesting garden shops and speciality Asian design stores, shared a love of animals, and made many memories together. So many thoughtful gifts she's sent when she found something she knew I would love. Our wedding gift was a beautiful antique Asian wedding headdress which is framed in a shadow box in our entry way. My husband and I planted a Peek-A-Boo Deutzia in our gardens in her memory in spring. The blooms resemble apple blossoms and were plentiful in late July. Later we scattered wildflower seeds along the top edge of a high river bank as a tribute to her love of nature. She, too, was an avid gardener. At Christmas I miss her most. She gave us many special ornaments over the years, and we always called her while decorating the tree and took a walk down memory lane with her, laughing and reliving fun moments.

We are ready to see our beloved ocean but have no firm plans yet. We spent a couple of weeks in GA in mid to late July in response to a family health emergency which continues. Related issues have brought far more stress into my life than is good for my health, but there are some things we must do when circumstances demand. I became ill with a respiratory infection and high fever in early September, and it did not want to let me go! Rest became the password for our life over the holidays, and I intend to give myself that gift as often as possible in 2013 so I can fully heal. I have been dragging for 4 months now.

Here's hoping you all climbed out of the heat and drought of a long summer if you are in other parts of the country and that winter has been kind so far. I hope these past couple of years have been good ones for you. I remain stunned at the violence in the country and concerned about climate change and the effects we see now. Natural disasters are always alarming. The destruction of Sandy all along the NE coast and other similar disasters in various places worldwide leave us all in disbelief, eager to help, overwhelmed by how. The deaths in Colorado, Arizona, and Connecticut, and the countless other gun related deaths which don't garner the same level of media attention are horrifying. I hope we wake up and dig our heads out of the sand. No remedy is foolproof, but we must protect our children and ourselves.

Until later, I send wishes for comfortable days filled with joy and good health and a new year that totally suits your fancy!
Posted by Sky at 5:13 AM

Thanks for updating. I much prefer the blogworld over Facebook, although I know it's easier to communicate and update there. But this is so much more intimate and personal.

I've always wanted to see a black bear. I've seen their traces in the Appalachian, back when I used to go camping and hiking. It's amazing that you've come across as many as you have!

I'm sorry to hear about the loss of your friend. It is so true what you say that a sudden loss can shake you to your core. I've experienced that way too many times. I guess we can only cherish the moments that we are granted to spend with others. You never fully appreciate those moments until you are stripped of them.

I've been planning a trip out to the PNW for so many years now, but things/life always get in the way. Maybe 2013 will be the year for it. If not, I look forward to your visit to NY that you had mentioned you have planned. I would love to spend a day with you here and show you around -- New Yawker style. ;-)

One Woman's Journey - a journal being written from Woodhaven - her cottage in the woods. said...

Sky, so busy and reading less - I did not know you had a new post.
So glad you checked in...

Lovely to see you again, Sky. Welcome back to blogworld!

I can't take to Facebook either, so it is so good to catch up on your news here, and my condolences on the loss of your friend. A real shock it must have been and something that needs time to work through.

My best to you - enjoy your garden and the summer to come. x

Oh, please stay here and write once in a while.

Sky, thank you as always for sharing your awe of natural beauty, your concern for the wellbeing of Earth's children, and your gift of speaking from the heart.

Sky
Married to an East Indian, I am a southern woman who now lives in the beautiful Pacific NW. Our life is a blending of the East and West cultures from which we come, an open canvas for us to create the balance we most enjoy. Fiery in nature, I am passionate about the things I love, somewhat spontaneous, curious about life and people, and speak with a slight southern drawl. You will easily find me on the pages of this journal, whether in my love of our gardens, my deep appreciation of nature, my strong political beliefs, or our travels along this stunning coast and through the two mountain ranges surrounding us. Explore here and enjoy. :)